Vitamin D - The Sunshine Vitamin and you

Vitamin D is incredibly interesting - never more so than today. With our indoor life and lack of oily fish in the diet (or in the sea) it’s deficiency has become more widely recognised. Now, with COVID’s predominance in the BAME community, and links between COVID outcome and Vitamin D3 levels,  understanding it has become an urgent, potentially lifesaving matter for us as individuals as well as for public health.

I should say that by Vitamin D, I mean vitamin D3, the active form of Vitamin D. Suffice it to say that vitamin D2 in one of its precursors and needs the action of sunlight to activate it to vitamin D3.

It's actually more like a hormone than a vitamin in that we can make it for ourselves, and it has widespread widespread biological effects. It's called a vitamin for historical reasons. Vitamin D because it was discovered after Vitamins A B and C. I kid you not!

That there is more rickets, the consequence of severe Vitamin D3 lack in the UK that at any time over the last 50 years is a clue that deficiency is more common that we might think.

When I was diagnosed with Multiple Sclerosis, in 2012, I naturally had a closer look at what lies behind this strange and interesting disorder. My own vitamin D level was marginally low, though not as low as some of my patients. Building on my non-specialist knowledge I soon noticed it’s considerable variation with latitude and this led me to the important role of Vitamin D in MS

The map shows the distribution of MS; the redder the area, the more common the MS: 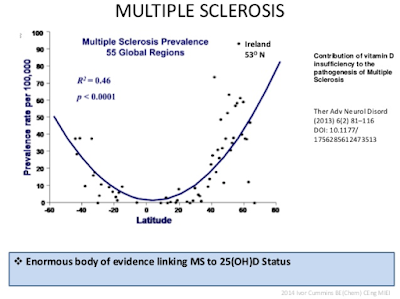 Pretty convincing, but what about the rest of you people without MS?

VITAMIN D LEVELS AND YOU

This picture show how low our Vitamin D levels are compared to how they are with full sun exposure or in our primate cousins. 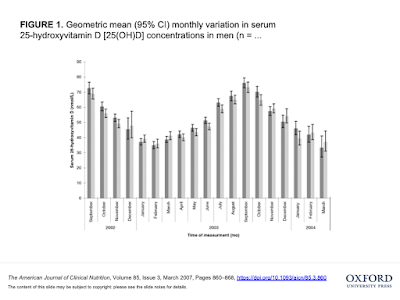 So, Levels needed for the immune benefits of Vitamin D (>70nmmol/l) are commonly low, even in the white population.

Levels have been shown to be low through Europe, a phenomenon the authors of this paper called, prophetically enough, a pandemic!

Blood levels measured in a London ante-natal clinic came up with the shocking fact that Vitamin D levels less that 25nmol/l (that is very very low) were found in 47% of Asian women, 58% of black women and 13% of white women. This deficiency causes problems for bone health, and the levels are far short of those needed for immune benefits.

In summary it seems to be there is abundant evidence of the lack of Vitamin D and its potential benefits throughout the population and more so in BAME groups.

For people with MS it is clear that low vitamin D levels are associated with an increased risk of diagnosis and a worse course of the disorder. Not only do blood levels predict outcome, but so does where you live; the further north, the more common it becomes. So, is this due to Vitamin D, or just an association?

Years ago I found it disappointing that simple randomised trials of supplementation had not totally answered this question. Vitamin D is simply too cheap and readily available for anyone to provide the substantial amount of cash needed to run such a definitive trial. There would be no financial profit to be made!

Further, a large, long term placebo controlled trial would now be highly unethical, as it would involve denying the placebo arm a treatment for which there is already enough evidence to use.

So, it seemed clear to me the best thing to do is to go along with the best science available. This clearly suggests taking the vitamin as well as spending enough time in the sun to manufacture as much of my own as possible. The evidence is good enough for people with MS to make sure their levels are in the upper ranges of normal.

It is also clear to me that the need for people with dark skins and those leading an indoor life to become vitamin D replete is urgent.

I now have been taking 5000iu daily for many years, without any problems so far. This is the dose most likely to replace the deficiency of sun exposure and modern diet and is not linked to any evidence of toxicity. Many people I know with MS do the same. Why wait for perfect science which will likely as not never arrive?

How does this relate to COVID19?

It is beyond the scope of this post to look at the physiological mechanisms whereby Vitamin D could affect outcome with CODIV, but as a clue this study highlights its cell membrane stabilising and anti-inflammatory properties. These mechanisms might help reduce damage caused by the cytokines which mediate inflammation and are behind so many ‘modern’ illnesses.

It is this cytokine storm which is behind severe COVID.

When it became clear that COVID was hitting people with dark skin far harder that the white population, my ears pricked up. The first ten doctors to die in the UK had dark skin, so did the first two pregnant women to die. There is a well observed preponderance of people with dark skin in intensive care units around the world.

An excellent review has been conducted by Dr David Grimes, see here for more details.

The Intensive Care and National Audit research Centre revealed that 35% of those in ITU were BAME, whilst only making up 13% of the general population. Though comprising 44% of NHS workers, they comprise 68% of NHS workers known to have died as of the 17th April 2020. It has been reported that in some American cities, BAME groups occupy 70% of the ITU beds despite only representing 30% of the population.

This is jaw dropping data!

For sure, some of this is due to deprivation. Poverty, overcrowding, discrimination, stress and lack of opportunity are far more common the BAME community and I’m sure this explains some of it, but those doctors dying of COVID were not likely to be materially deprived.

Some of this excess might play out through the immune damaging effects of lifestyle, smoking, alcohol, and a pretty terrible fast food predominant diet. Obesity too plays a big role as three quarters of ventilated patients are overweight or obese. COVID is magnifying society’s ills wherever it strikes, but I am sure there is more.

The theoretical background to this is beautifully simple. Homo sapiens, in our original state, all had black skin to protect us from the blistering equatorial and tropical sun in which we evolved. This would have not have changed had we not been globetrotters.

Migration to temperate zones with short winter days and far less sunlight created less than fully understood evolutionary pressure against those with darker skin. One postulated reason for this is that darker skin led to less conversion of vitamin D's building blocks to the active Vitamin and the resulting deficiency caused Rickets, the most extreme manifestation of Vitamin D deficiency.

If so, one of the consequences of would be bony deformities, including contracted pelvic outlets which would led to difficult childbirths. This created an evolutionary advantaged for those with lighter skin. Now we have a temperate zone where light skinned populations can absorb more light and thus make sufficient levels of the ‘sunshine vitamin’.

Indeed, it may well be that life as far north as Scandinavia, even Scotland, was only made possible with a very rich oily sea food diet loaded with Vitamin D. Hence the increased incidence of MS up there as that rich food source has diminished in the seas as well as the diet.

In this modern age, many migrations later, we have people with different levels of melanin in their skin everywhere. Back to the problem of absorption of sunlight and back we are again with important issue of Vitamin D deficiency. Levels of Vitamin D are low in most of the population, though lowest in those with dark skin.

In my opinion, public health organisations have not caught up with this as yet, though do recommend supplementation for pregnant women and young children. The 400iu a day they recommend is to “maintain healthy bones teeth and muscles”, and deliver immune benefits.

People from BAME background are not only more likely to be deficient, but are also less likely to take supplements.

Fortification of food is potentially better that leaving vitamin D intake to the individual. In Finland it has improved things, though even after fortification reports suggest only a third of children achieved recommended Vitamin D levels.

Reducing inequality, deprivation and the consequent unhealthy lifestyles might inevitably reduce the risk of Vitamin D deficiency, but it is unreasonable to wait for this to happen, more so in my opinion with successive Conservative Governments who have seen an increase in inequality deprivation and poverty while in power. It seems to be to me risky in the extreme not to bring vitamin D levels in the blood and thus the body to normal levels by taking Vitamin D3 5000iu daily. Why not indeed!

I penned a letter to the Guardian which got some interesting replies. Colleagues have  written asking for support with campaigns to improve research on this. Do help by signing. Thanks Lola!

A campaigning group in Scotland got in touch. They shared unpublished data on Vitamin D status and severity of COVID. Thanks Rob!

Researchers retrospectively looked at the records of 212 cases in South East Asia to examine any link between vitamin D blood levels and outcome from COVID.

Summarising their findings; 3.6% of those with normal vitamin D levels developed severe disease as opposed to 40% of those with Vitamin D deficiency.

Now this might reflect people with low vitamin D levels have other health problems which led them to be indoors and away from the sun.  Yet, despite scientific criticism of retrospective data, association rather that causation, and reverse causation, surely it makes sense to supplement at this point in time? I certainly does for me.

If you make this choice there are a couple of points to mention.

GETTING OUT INTO THE SUN

First, sunlight is very good for you as long as you don’t get burnt. It is said to raise melatonin levels meaning better sleep and has a positive effect on mood. Natural ways of getting Vitamin D likely to be the best. However the lockdown might be making this difficult to achieve, as have the last few gloomy summers as well as the online world, indoor life and modern working environments.

The most sensible dose to replace the effect of missing sunlight is 5000 iu a day. Being in the sun for 20 minutes front, back and sides will mean you synthesise the maximum amount of Vitamin D the body can make before running out of Vitamin D precursors – this is about 15000iu daily.

CAN YOU GET ENOUGH VITAMIN D FROM THE DIET?

This is unlikely and clearly not the case for the majority of the population. We simply don’t eat enough oily fish. As I have mentioned, there are not enough fish left in our depleted seas to fulfil this need. This table shows why diet will rarely be good enough to compensate for the modern lifestyle of dark skin in temperate zones. 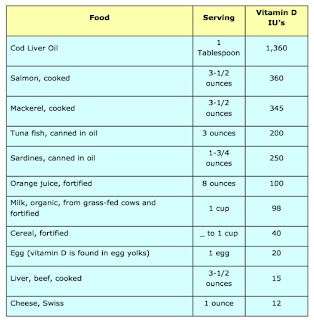 So supplements make sense. Vitamin D3 is ideally taken once daily with a fatty meal as it is a fat soluble vitamin.

There might be confusion between the use if IU (International units) which relate to activity and micrograms which relates to weight. 1mcg = 40iu, or 5000iu daily = 125mcg.

In summary, get out in the sun, eat well and supplement with Vitamin D3.

I hope you find this helpful.